Ten interesting, surprising and strange things about Latvia and Latvians (Part one) 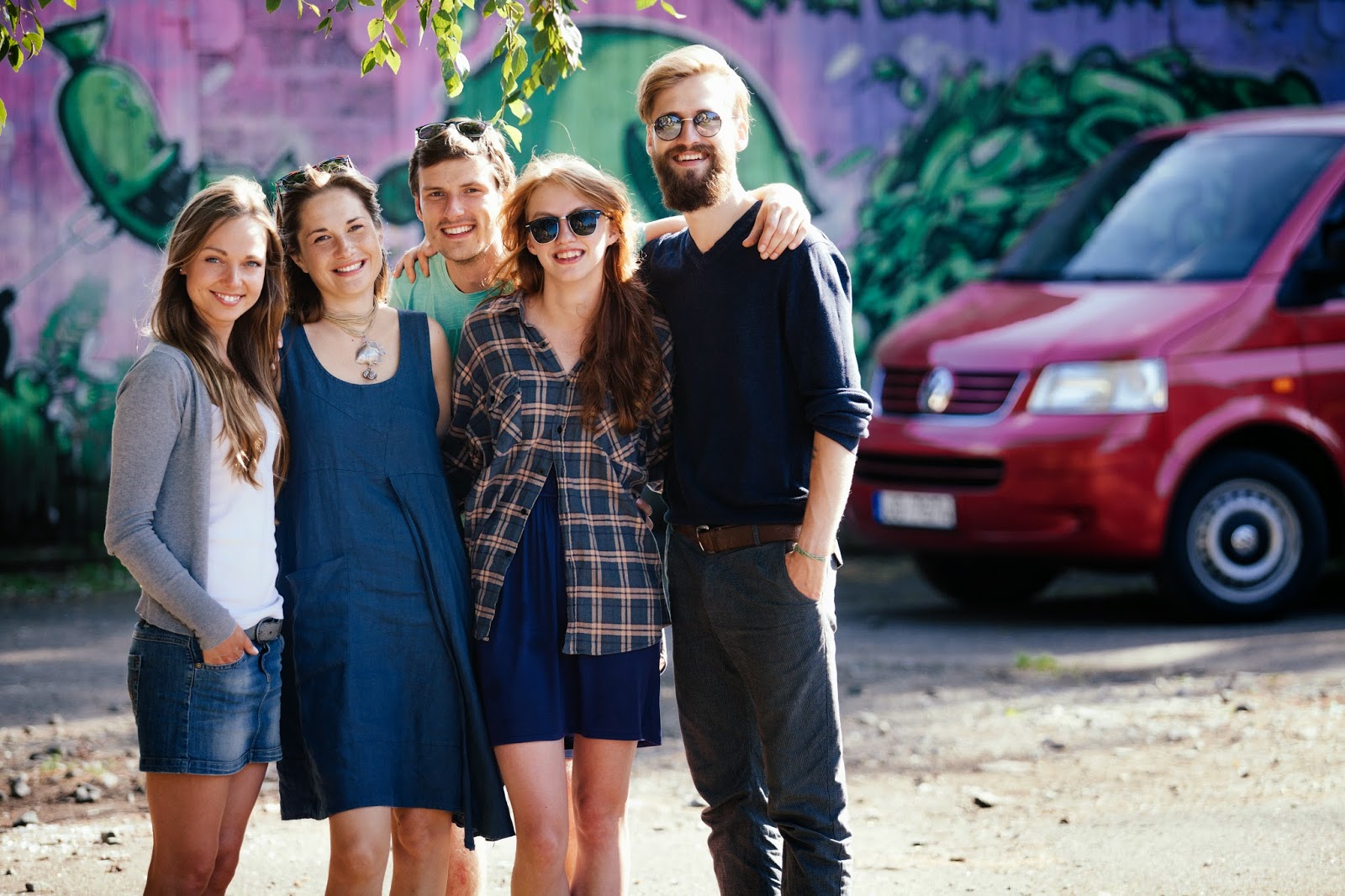 Latvians have an interesting relationship with the letter “s,” which is rather like their relationship with the herb dill: namely that they love it more than can really be explained think that it should be used at every possible opportunity. In most countries, going up to someone and saying something like “Hello, my name is Will” in the native language presents few problems. A Latvian, faced with this, is likely to react something along the following lines: “oh my god, oh my god, oh my god, a man whose named doesn’t end in “s”. How can this be?” *Head explodes* As a result, when in Latvia, I am stuck with the frankly silly name of “Viljams Mauhuds.” Foreign names in Latvia are changed to fit with Latvian grammatical and spelling conventions – that means “s” endings for the men, and “a” or “e” for the ladies. Even if your name is something seemingly Latvian-friendly like Thomas, they will look at you very suspiciously, as though you are trying to get away with something, and stick on an extra “s,” just for good measure. This does at least make reading Latvian newspapers rather like attempting some kind of strange word puzzle: Vladimirs Putins isn’t too hard, but who’s Džordžs Klūnijs? 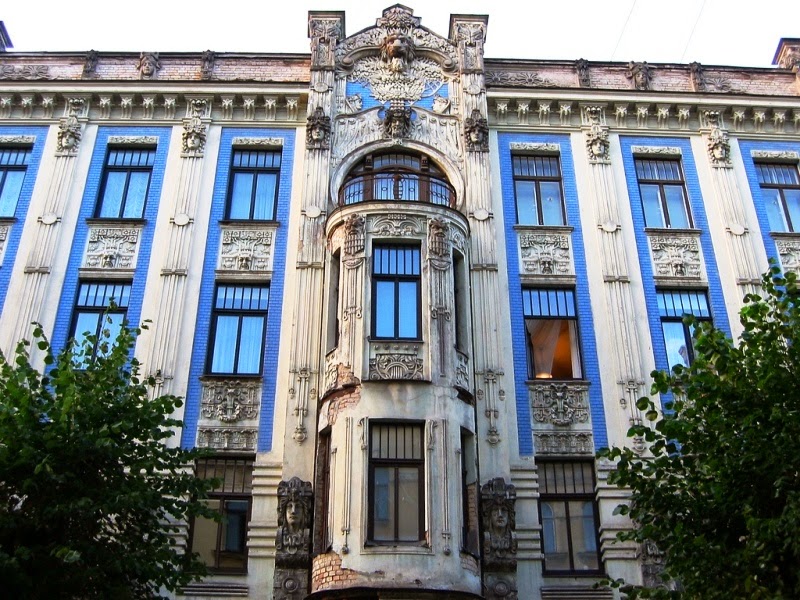 What do you think the world’s number one Art Nouveau city is? Go on, have a guess. Paris? Barcelona? St Petersburg? Well, you’re wrong. All of them, frankly, wish they were Riga, which is blessed with more Art Nouveau buildings than any other city on the planet. These are a result of a burst of prosperity and energy in the first decade of the 20th century, during which Riga became the fourth-largest city of the Russian Empire, after only Moscow, St. Petersburg and Warsaw. The suddenly-rich merchant class decided, luckily for us, to spend a lot of their new-found money on candy-coloured constructions decorated by mythological figures and screaming women. It says a lot about the over-the-top style favoured at that time that Mihail Eisenstein, the architect of numerous Art Nouveau buildings, was known as the “Crazy Cake Baker”. Even many of the less extravagant buildings are adorned with faces in surprising places, contributing to a general feeling that you are being watched. If you suffer from even very mild paranoia, it’s probably best to give Riga a miss. If you like nice buildings, though, put it right at the top of your “to do” list. 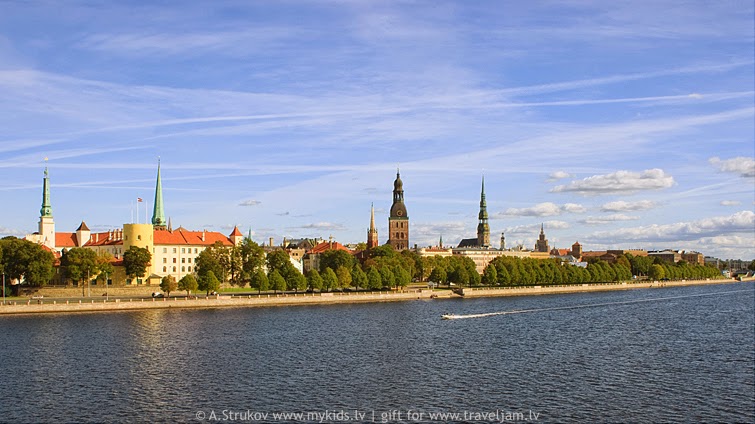 Latvia is to the rest of the world, when it is noticed at all, usually referred to as one of the “Baltic countries”, suggesting perhaps that the three countries are more or less the same – or at least very similar. This is not quite the case, although there are longstanding connections between the two countries: Latvia is linked to Lithuania by its language (related, but not mutually intelligible), and to Estonia by its predominant religion (Lutheranism) and an almost identical recent history. The people of the three countriesdid co-operate closely to bring about their independence from the Soviet Union, leading to inspiring historical events like the Baltic Way, when millions of Balts joined hands, forming a line from Tallinn to Vilnius, through Riga. And yet despite all this, when you cross borders in the Baltics, you often have the weird sense that the country you have just come from has completely disappeared – few people know more than a couple of words of the others’ language, and often not the names of their leaders or major cities. The average Estonian, for example, only knows one word of Latvian: which is, weirdly, saldējums (ice cream). Affectionate jokes are frequent, however:  Estonians are convinced, for reasons I am still not completely sure of, that Latvians have six toes; Lithuanians, meanwhile, refer to Latvians as “horse heads,” for the not entirely logical reason that they feel the country is shaped like the head of the aforementioned animal  – whether they refer to the Italians as “boots,” or themselves as “potatoes” is not made clear. 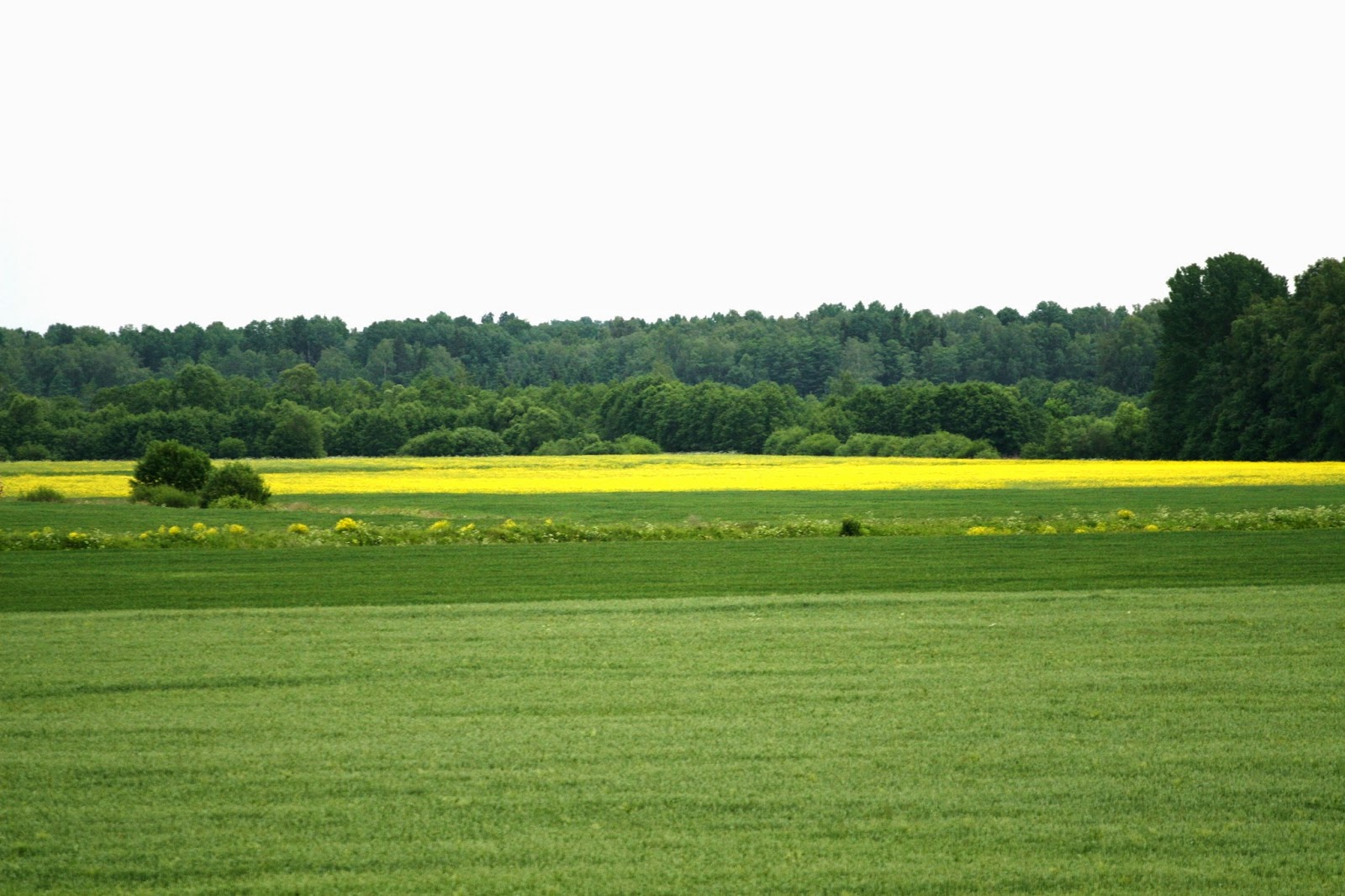 Latvia has a knack of topping online polls: in a 2012 poll by the British travel company First Choice, conducted by Twitter and Pinterest, to find the most beautiful country in the world, Latvia came first with 36% of the vote, a result that you sense the commissioners of the survey were not totally prepared for, judging by their somewhat panicked response: “Latvia is a beautiful destination, although unfortunately it’s not somewhere we send our customers.” In another victory for Latvia over the rest of the world, just-outside-the-city-centre street Miera iela was named by Skyscanner in a poll this year as “the most hipster neighbourhood in the world,” beating off rather better-known districts in London, New York, Berlin and Barcelona. Whatever the case, it’s certainly a pretty cool area: packed with cutesy cafes, vintage trams rattling up and down every five minutes and one of Latvia’s hippest clubs in Piens. Plus there is an actual real chocolate factory bang in the middle, the headquarters of marvellous confectioners Laima. The inhabitants of Kreuzberg or Williamsburg may (may) have cooler clothes or better music, but do they wake up to the sweet aroma of chocolate wafting down their streets on summer days? I think not. Whether the country’s global dominance is because of a handful of mischievous internet-savvy Latvians or a simple reflection of reality, TravelJam gives you the chance to make your own decision.

5. Everyone wants a piece of Latvia 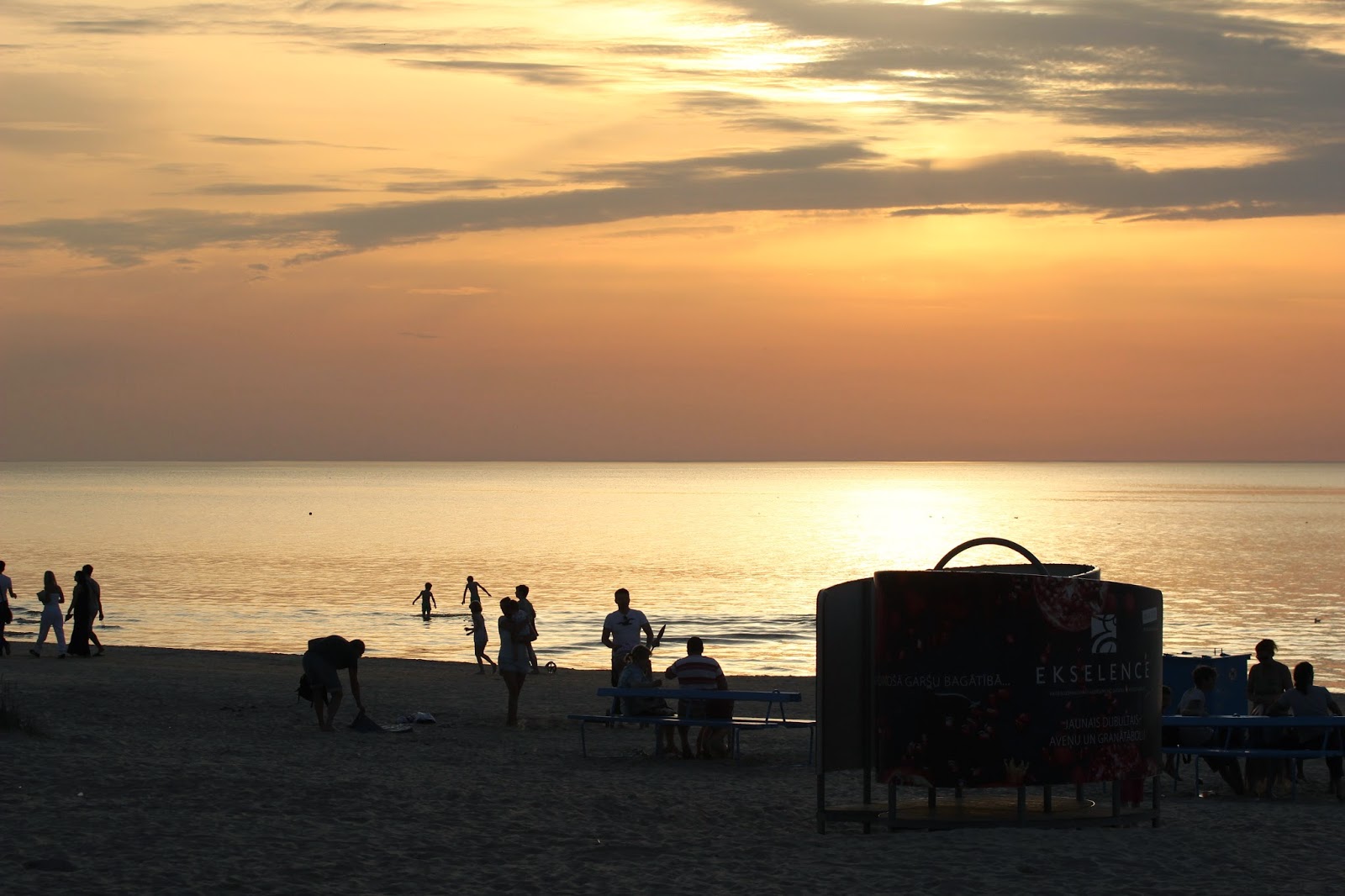 Latvians are generally, if you go far back enough, country folk. Apart from a twenty year spell of independence between the world wars, and another one lasting from 1991 indefinitely (fingers crossed) the region has always been occupied by foreign powers: Russia, Sweden, Germany, Poland. The Baltic German aristocracy tended to be caretakers for whatever group were controlling the country at the time, and also dominated the skilled professions, while most Latvians worked on the land, or at best as teachers, doctors or merchants; a state of affairs that continued until independence in 1918. One of the results of this is that almost every city and village in Latvia has a parallel German name, and often another Russian one – everyone seemed happy enough with Riga, but cities like Liepāja were also known as “Libau” (German) or “Libava” (Russian); Cēsis is “Wenden” to the Germans and “Vonnu” to the Estonians, whereas the eastern city of Daugavpils has no less than eleven names. With this history, it’s perhaps not surprising that modern Riga is a patchwork of different cultural influence: much of the red-brick Old Town could come straight from Hamburg or Lübeck; while Russia is represented by the bulbous, multi-coloured domes of numerous Orthodox churches, as well as the severe grey boxes of the Communist period. Early 20th century National Romantic structures adorned with folk motifs remind us of Latvia’s brief interwar period of freedom – only the 200-year Swedish rule left few traces, represented only by one 17th century gate in the Old Town.

Will Mawhood has lived in the Baltics on and off for three years. When he is not learning Latvian and writing amazing blog posts, he helps Latvians improve their English with his proofreading company, Sussex English Solutions. He has learnt to love dill and the letter "s"